Have you all seen this picture floating around Pinterest? 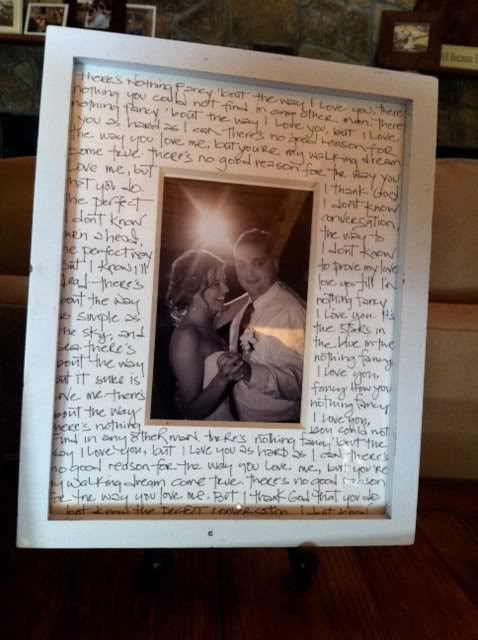 Cute, right?  You simply write the lyrics to the song you first danced to as a married couple on the matte inside the frame.  Easy. 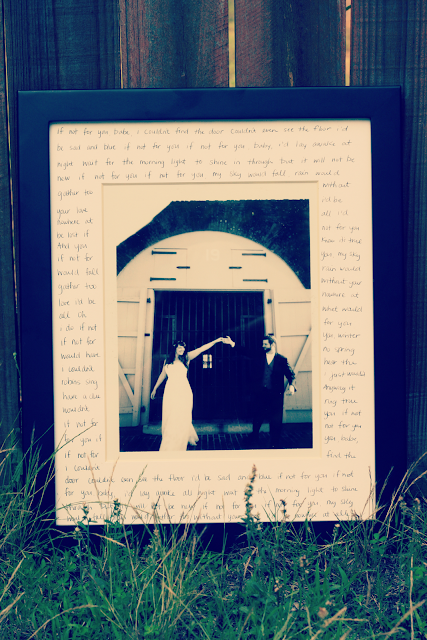 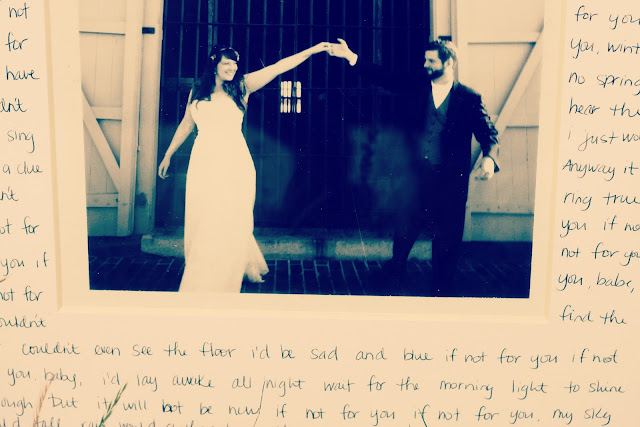 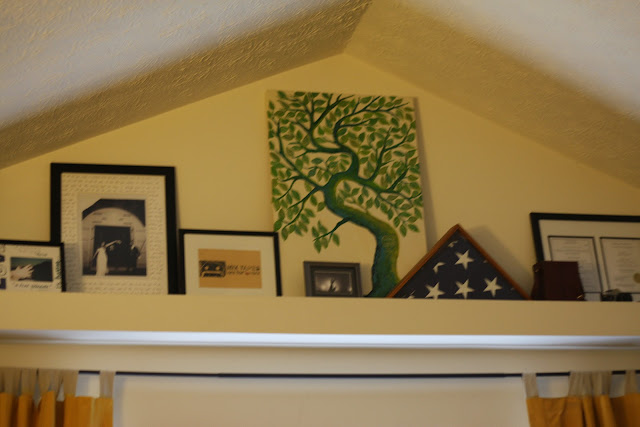 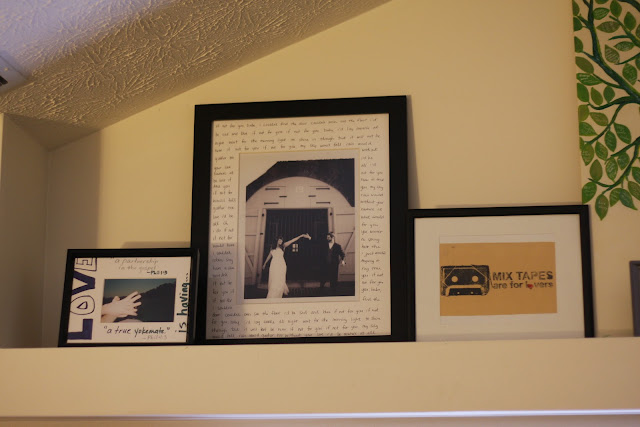 Our song was "If Not For You" which is originally Bob Dylan, but we danced to the Derek Webb & Sandra McCracken version.  If you've heard Bob Dylan sing, there's no explanation necessary.  We've since seen Derek & Sandra in concert at Eddie's Attic in Decatur, GA.  We're fans of theirs.  I'm pretty sure they'd be fans of ours if we all knew each other.

Here are the lyrics:

If not for you, babe, I couldn't find the door
Couldn't even see the floor
I'd be sad and blue if not for you.

If not for you, baby, I'd lay awake all night
Wait for the morning light
To shine in through
But it will not be new if not for you.

If not for you, my sky would fall, rain would gather too
Without your love I'd be nowhere at all
I'd be lost if not for you
And you know it's true.

If not for you, my sky would fall, rain would gather too
Without your love I'd be nowhere at all
Oh what would I do if not for you?

So, what song did you first dance to at your wedding or what song would you like to dance to?  Here's to hoping we all keep dancing through the years...cheers!

I love this video, don't you?
"Like most elementary schools in America, Colonial Hills has a once-a-year track and field day, and like most kids, Matt was clearly eager to take part.  However, unlike most of his peers, Matt suffers from spastic cerebral palsy, a debilitating condition that limits his ability to undergo rigorous physical exercise of any kind. Incredibly, despite knowing those limitations, Matt decided to run the 400-meter event (roughly quarter of a mile) on the school's 200-meter track."  (source - Yahoo's sports page)

I've seen plenty of displays of ugliness from people, but I know that's not who God created us to be.  In the first video, there are two pieces that I really connect with.  First, I'm really moved by the gym teacher running alongside Matt.  You can tell that Matt is determined to complete the race on his own, but he is equally encouraged by the support he receives simply through the presence of his teacher.  Then, it's ten times as powerful when his peers join in and start cheering for him to finish the race.  When was the last time you cheered for someone you know?  I mean, maybe not literally.  But we all know at least one person who's going through a challenging time right now.  I think we underestimate the power of two things: our words and our presence.  Matt's teacher didn't need to say much, but Matt knew he was there for him.  Matt's cheering section was positive and very clear in their belief that he would finish.  When was the last time you let someone know you were there for her?  When was the last time you spoke genuine, encouraging words to someone who really needed it?
The second thing that really struck me was Matt's unrelenting determination.  There are a few times he slows down to almost a walking pace, but he never once stops.  I don't know about you, but too many times I've made excuses for myself when trying to accomplish things that seem impossible or too challenging to me.  What would happen in my life - for me, for my family - if I stopped making excuses for myself and just kept going - BELIEVING that I would accomplish what I set out to do?

If you know me personally, you know that I love Jesus.  I believe that in my "race" Jesus is running right beside me, just like Matt's teacher.  Do you remember Derek Redmond from the 1992 Olympics?  Watch the clip below...

When we need him, our heavenly Father comes alongside us and helps us.  He doesn't keep us from pain or challenges, but he will always helps us finish the race.  It doesn't really matter if we struggle.  What matters is if we quit or keep going.


One of my favorite movie clips is the opening to Love, Actually.  You know, this one . . .


A bit cheesy, perhaps, but I, too, believe that love is all around us.  One step further, I believe God is all around us.  It doesn't really matter if we believe it or not - He believes in us.  And he is there, running right next to me, cheering me on if I need it, and ready to catch me if I call on Him.

Laura Sue
This blog is dedicated to celebrating things I think are beautiful. By the way, you're beautiful, too. Thanks for stopping by, and be sure to leave me a love note!